How Is Your Imagination? 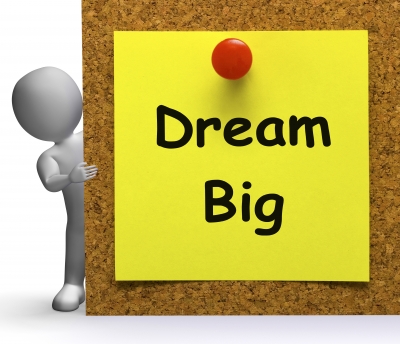 Do you have an active imagination? Do you realize in order to build a truly successful business this is one of many key components? According to Napoleon Hill in his books the The Law of Success in Sixteen Lessons, lesson six is all about the importance of imagination. Did you realize absolutely everything you see was once an idea in someone’s imagination? Every chair, building, automobile, cell phone, movie and clothes started out as an idea from a person using their imagination.

The dictionary defines imagination as the act of constructive intellect in forming images or concepts into knowledge or thought of what is not actually present to the senses. Whether you have started your business or it is still in your imagination, this is a crucial step to making the business a reality. You must see things in your mind that do not exist. This is tough for most people, but the successful entrepreneur has depth of vision. That ability to see what no one else sees.

To quote one of Hill’s paragraphs from the six lesson of the book speaking of pig iron. A ton of pig iron is worth but little. Add to the that pig iron carbon, silicon, manganese, sulphur and phosphorus, and you have transformed it into steel, which is of much greater value. Add still other substances, in the right proportions, including some skilled labor and the same ton of steel is transformed into watch springs worth a small fortune. But in all these transformation processes the one ingredient that is worth most is the one that has no material form—imagination. Hill’s example from 1927 may seem a bit antique but the principle is just as valid here 87 years later. It took imagination and vision to look at a pile of worthless pig iron and see valuable watch springs.

Take the story of Walt Disney. Mr. Disney had an amazing imagination. What most people in the 1960s saw as worthless swamp land in inland Florida, he saw as a magical paradise where people would come from all around the world to see his Walt Disney World. Only Disney could have imagined 40 square miles of worthless swamp land turned into one of the top tourist attractions in the world. His vision of a future self sustaining city, now known as EPCOT, is still a modern marvel over 43 years later. Even though Walt Disney passed away five years before he saw his masterpiece, he had seen it all before in his imagination.

Do you have a successful imagination? Use some quiet meditation time daily to let your imagination run free and solve a common problem. Who knows, maybe you are the next Walt Disney, just imagine?

“All our dreams can come true, if we have the courage to pursue them”.—Walt Disney

Image by Stuart Miles at www.freedigitalphotos.net

7 Responses to How Is Your Imagination?