Stop Complaining, No One Cares 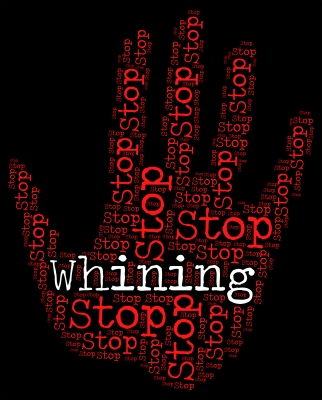 Do you have a friend, family member or coworker that can’t stop complaining? Everyday it seems there is something new to complain about. The weather, politics, traffic, the dry cleaners or their spouse, but always complaining? Complaining to some folks is how they communicate, interestingly though, they never seem to see themselves as negative or miserable. When you confront them, they swear they are happy and positive. Really? Let’s look at complaining from another angle.

People that always complain are negative by nature. When a person is always negative they attract more negative in their lives. I have actually seen people spill a drink by overfilling a cup or glass and announcing as they walk to their seat “watch me spill this on myself” and you guessed it, spilled all over themselves and those lucky souls near them. We all attract what we think about most often good or bad. Complaining is like an emotional cancer, that no one wants to contract from these individuals.

Take the story of the old wise man. One day, a man climbed the mountain to speak to the old wise man who resides there. It seems the man had a hard time fitting in with others and being wanted. He learned a very funny joke and began to tell his joke to others. Everyone laughed and laughed at his joke and all of a sudden, he became popular. However, as weeks went by, people that laughed at his joke only began to chuckle. Then only a few would smile and finally after a month, no one thought his joke was funny anymore. The wise old man told the man that after some time, the joke is no longer funny and he must learn a new joke. The wise old man said it is the same problem with crying over the same complaints, no one really cares anymore.

Those that are strong people see complaining as a weakness. Complainers are seen as weak people not capable of solving their own problems. Complaining in most cases is just whining as an adult. These complainers are not looking for a solution, because they “just need to vent”. They accept their situation as hopeless or status quo, instead of working to change the situation and making it into a positive one, or at least change to a positive attitude about their situation. A complainer only sees the fortunate people as “lucky”, because they themselves, never have “lucky” things happen to them. Again it’s all about The Law of Attraction. You may never change a complainer but you absolutely must limit your time with their complaining. Unfortunately, we do become the people we most often associate with on a day to day basis. Just say no to public complaining, the Complaint Department is now closed!

“Complaining about a problem without proposing a solution is called whining.” —Teddy Roosevelt

Image by Stuart Miles at www.freedigitalphotos.net

Tim Wilhoit is owner/principal of Your Friend 4 Life Insurance Agency in Nashville, TN. He is a family man, father of 3, entrepreneur, insurance agent, life insurance broker, salesman, sales trainer, recruiter, public speaker, blogger, author and team leader with over 28 years of experience in sales and marketing in the insurance and beverage industries.

65 Responses to Stop Complaining, No One Cares